This article was originally published in the Virginia Gazette on 3/14, written by Christine Sampson. To view it in it’s entirety, click here.

WILLIAMSBURG – When it comes to planning a new or renovated fourth middle school for WJC Schools, WJC school officials say not just any plan will do.

That’s because the school division is in need of a “21st century learning facility,” according to Superintendent Steven Constantino, who sketched out a vision for such a facility during Tuesday’s joint budget meeting between school, city and county officials. 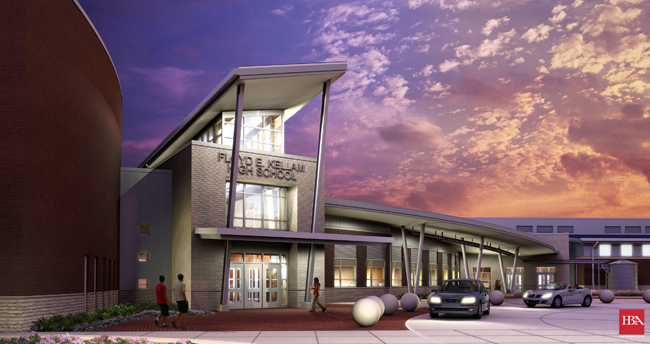 It would include flexible spaces that could be adapted to a variety of student needs, whether they are in small groups or large groups. Constantino noted that “students don’t come in bunches of 25.” The thinking isn’t so much the open spaces with accordion walls popular in 1970s school design, but rather multi-purpose spaces of various sizes that are conducive to technology, collaboration, and opportunity for differentiated learning. It would meet the needs of students who are visual learners, auditory learners, kinesthetic learners. It would build in opportunities for “station teaching,” an approach many teachers already utilize, and for alternative education.

“Research basically shows us now that students learn in different ways, at different rates,” he said in a follow-up interview Thursday. “That means we need to perhaps regroup kids. Based on what happened today or this week, we might want to teach differently next week. It’s difficult for teachers to meet those needs in the kinds of spaces that we have traditionally known as classrooms.”

“If you have 10 students on a Monday morning that start out learning at their own pace, it won’t be long before you have several groups of students in several different places,” he added. “How can we then facilitate learning?”

On Tuesday, some city and county officials suggested that the coming middle school capacity problem could be solved by expanding the current three middle schools. That option was considered by the Middle School Learning and Facility Study Committee, which estimated it would cost $13.15 million and provide space for 437 more students. However, that was not one of its ultimate recommendations because the “number of students added is not enough to cope with long-term growth” and because it would likely not meet educational needs decades in the future.

“Can you build wings on buildings? Sure you can,” Constantino said at the joint meeting. “You’ll still have a double-loaded corridor… and classrooms that were designed, in some cases, many years ago.”

The present design of schools is out-of-date, he said. He said he often sees students doing work in the hallways – in many cases, those students are the ones learning at a remedial pace.

“I’m not so sure that ‘hallway learning’ is appropriate,” he said, referring to instances when a student is sent outside the room to complete an assignment. “We could create appropriate learning spaces for all kids.”

For good examples of planning for both present and future student needs, Constantino pointed to the Gloucester‘s new Page Middle School, still under construction as a replacement for the school flattened by a tornado in 2011, and Virginia Beach’s Kellam High School, which was among close to 30 buildings renovated as part of a 15-year, $555 million modernization program. 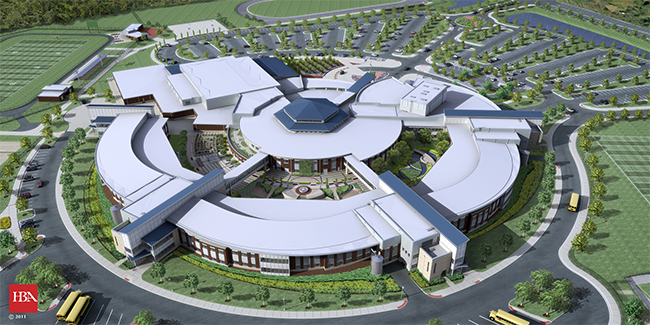 Chuck Wagner, assistant superintendent for instruction in Gloucester schools and a former principal in WJC Schools, said the new Page Middle School has been designed around the concept of three “houses” – one each for grades six, seven and eight. Each house has not only classrooms but also common areas “designed for collaborative student learning, where teachers could utilize that space outside of their classroom for extended learning or enrichment.”

“We feel as if we’ve located classrooms in an arrangement where teachers can collaborate with one another,” Wagner said. “They can share students and share instructional time, and through that sharing, we feel that over time we’ll be able to incorporate more integrated learning across content areas. We recognize it’s going to take time for that to occur, but you need the space for that to occur.”

Embedded in the house idea, Wagner said, will be a team teaching approach. “We’re not anticipating that bells will ring every hour and students will change locations in a traditional concept,” he said. “We’re anticipating that a team of teachers will be given a block of time and they will work out themselves how that block will best be utilized to achieve the group’s learning objective. We want our teachers to have more ownership of how they utilize their instructional time.”

The new $26.3 million Page Middle School will open in 2015 with a capacity for 650 students in grades six through eight. At the same time, Gloucester’s Peasley Middle School – which right now houses only the sixth and seventh grades during construction, while the eighth graders attend school in modular classrooms at Gloucester High – will re-open as a school for all three grades.

Tony Arnold, director of facilities planning and construction for Virginia Beach Schools, said the newly redesigned Kellam High School, which opened in January, is such a departure from traditional school design that the division has had visitors from around Virginia. With a capacity of 2,000 students, Kellam is now home to six “learning communities,” which consist of not only classrooms but also science labs, experiential labs, spaces for research and demonstration, smaller rooms for collaboration, and classrooms with partitions that can be removed so multiple groups of students can be combined. 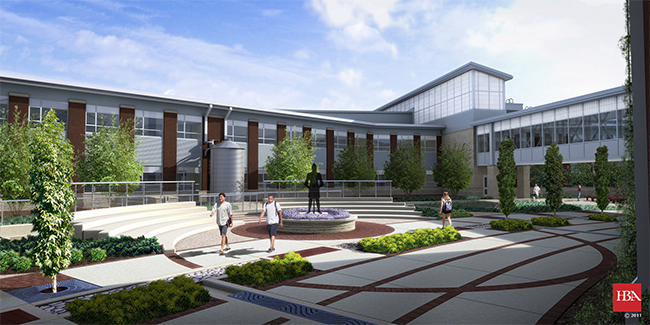 The learning communities are differentiated by neither grade level nor subject matter; they are organized simply according to the academic needs of the students themselves. There are indoor commons areas and outdoor courtyards – the design of which was drawn from Advanced Placement students’ own ideas.

“A teacher may have 15 kids in a classroom and a small group of five working on a project in a collaboration space,” Arnold said. “Rather than just sitting in a classroom in five rows of five, it’s a much more flexible space. You can have a lot going on in a learning community. … It’s much more transparent.”

“It’s interesting to see the reaction of people who have come in and cannot believe that this is actually a public high school,” he added.

Constantino said Tuesday that both of those school systems have embraced the concept of making sure they don’t “build themselves into a block.”

In debating the components of a 21st century learning facility on Tuesday, James City Supervisor Jim Kennedy said he was concerned about “fundamental fairness” for all students.

“If we build something today that’s visionary, what does that mean for the other schools?” he asked.

Constantino acknowledged that it would likely mean retrofitting the other schools with the same kind of resources that a new school would have. A line item in the proposed capital improvement plan calls for a division-wide technology refresh amounting to $4.2 million over the next five years.

The school division has proposed four options: Two involve demolishing James Blair facility and building anew, and two would renovate and modernize the building as it stands.

The prices of those options range from $28 million – for a phased-in approach that would see a renovated building for 650 students that could later be expanded to hold 950 students – to $40.2 million for a brand-new building altogether for 950 students. Either way, the school will need to open its doors by the fall of 2018 in order to meet the demand for more space. Already, Berkeley Middle School is over capacity, according to the official Sept. 30 student tally.

“Two years ago, when we met and I first launched the notion of a new middle school, I talked about the need for a 21st century learning facility,” he said at the meeting. “I haven’t backed off of that need. It’s a decision we’re going to live with for 40 or 50 years.”

“There’s often been criticism of decisions that have been short-sighted,” he added. “I’m trying to avoid the short-sightedness.”