On July 4th, I was in the company of heroes, including one of HBA’s own.

My father- in- law, William (Bill) Youngblood, his wife Chris, “little” brother Jack, his wife Pat, and his daughter Jackie and daughter’s husband Bobby came to visit for a traditional 4th of July picnic. The gathering was also to celebrate Bill’s 91st birthday early (just a few days away).

Both Bill and his brother were active in World War II, and Jack in the Korean War – Bill, in the Army Air Corp (*now Air Force) as a communications officer, and Jack in the Merchant Marines. Bill’s wartime experience included serving in  India and throughout the Pacific. Jack’s military career took him all over the world.

Since the day I first met Bill, he’s told me amazing stories of how he and his younger brother (3 years difference) used to get in trouble while growing up on a Michigan farm during the depression. His stories shed light on both the tough times the depression brought to our country as well as the joys growing up on a farm in the country and the philosophy of ‘making-do’.  Often included in those stories was a Ford Model ‘A’ that he and Jack used to own.  They spent untold hours tinkering with it, driving it to and from school a couple of towns away (yes, a one room schoolhouse just like we all hear about from our grandparents), and using it to catch the eyes of the local girls. From rewiring it, to scavenging junkyards for used tire tubes to recycle, or running the hills on empty, that car had an impact on their lives.

So, given the stories, you can imagine my excitement when Gordon Spence came to work at HBA a few years ago telling us about how he was restoring his dad’s old Model ‘A’ in his garage!  It turns out Gordon (younger by far to Bill and Jack) also grew up with the Model ‘A’, with his own fantastical stories about how he and his brother rode “on” that car over the dunes in Cape Cod with dad at the wheel. Gordon and his brother had many of their own adventures that were no less unbelievable. In talking with Gordon about the car over the years, I was promised the day he finished restoring it he would bring it by so I could get a picture of Bill behind the wheel. I knew that would bring an immeasurable smile to Bill’s face, and I really wanted that picture.

Yesterday I got my wish.

After 3 years of restoration, Gordon called me while my extended family was visiting. Unbeknownst to them I had communicated with Gordon a few days before and mentioned that not only was Bill going to be visiting, but Jack as well. Jack and his family haven’t been able to visit for some time, so that was special in and of itself.  The weather was agreeable, and Gordon’s call perfectly timed.  And it wasn’t until the unmistakable “AAAAOOOOOGGGAAAAHHHH” of the horn announced his arrival that the surprise was revealed. Moving the family to the open garage, they couldn’t believe their eyes! Sitting in the driveway was Gordon, with his very special car. Honestly I’m not sure whose smile was the biggest. Bill, unfortunately, is best in his wheel chair now, but wasted no time asking to sit and touch the car and get his photo. Jack also promptly wanted to know if he could see the engine, and promptly assisted with opening up the hood to admire Gordon’s handy work. Gordon also let him hop in and start it up. Jack remembered the four necessary steps like it was yesterday and the car came right to life.   Gordon showed us all the unique inner workings of this classic car and enjoyed learning that Pat, Jack’s wife, is also a Cape Cod kid.  And if it couldn’t have gotten better for me, Gordon let me drive his baby around the neighborhood. What a treat! My take away from that, after the waves and smiles from our neighbors (everyone that saw it felt obliged to do so!), was that we’d all be a lot better shape if we didn’t have power steering.

So I have to also mention that Gordon is also a vet, was a SEABEE for a number of years before becoming a Civil Servant, then retiring and coming to HBA before retiring again. My thanks to Gordon for treating my extended family, and for making a couple of “older” gentlemen smile and remember old times.  As I said, I was in the company of heroes!

If you see Gordon out on the road (he promised he will be driving it in town), be sure to honk and wave too- he loves it! 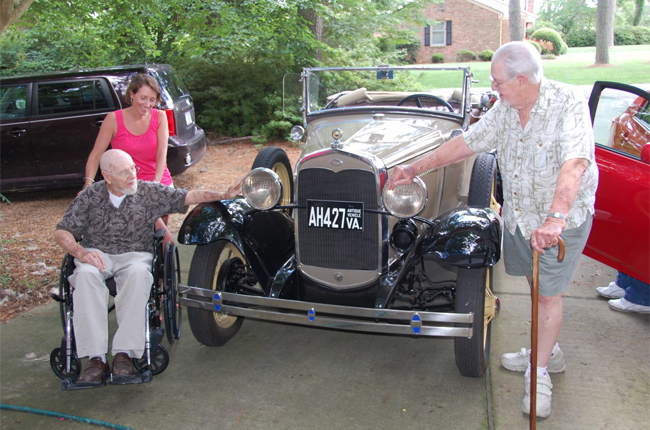 For all of you that are wondering, Gordon’s car is a 1931 Ford Model ‘A’ Roadster. His father assembled it from parts he found in Western Mass. New, the car cost around $500. Gordon tells me Ford made about 5 million Model ‘A’s back in the day. He isn’t sure just how many of those were Roadsters. 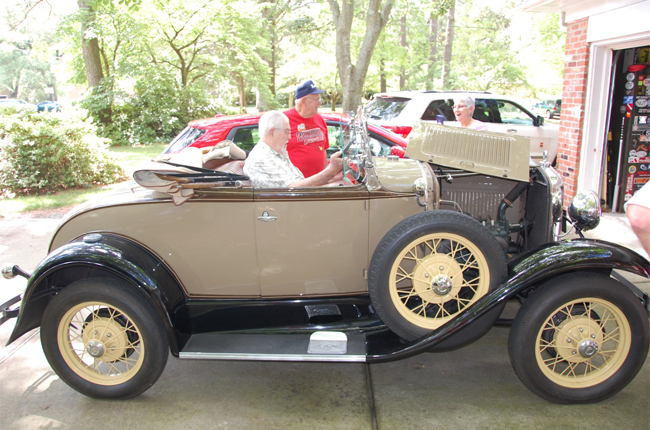 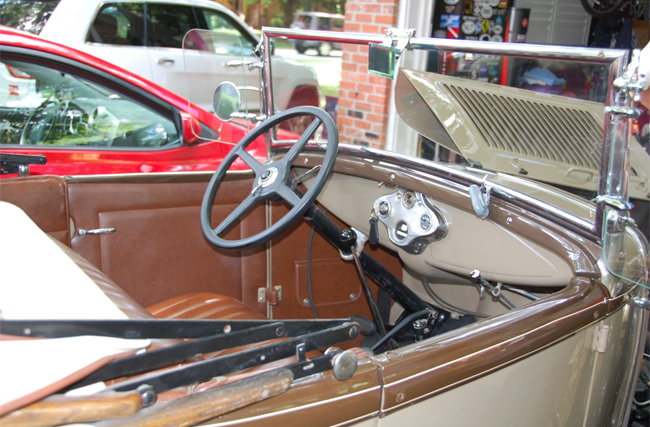 (and in case you didn’t know, Gordon’s the guy wearing the Louisville Cards t-shirt and Harvard hat) 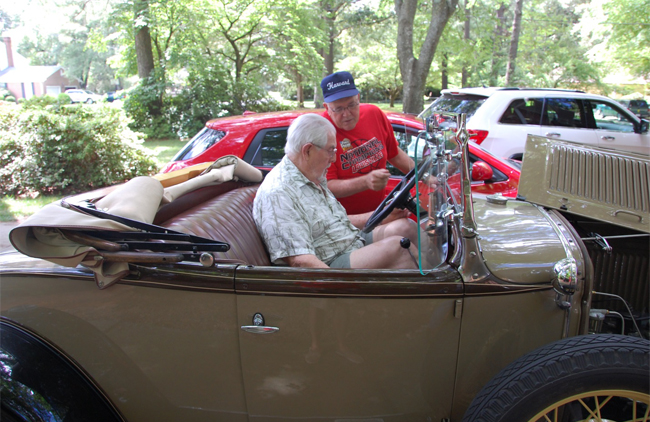