The challenge of adapting an existing office building into a court facility was answered by the design team in this new facility through the successful integration of the new with the old, while maintaining all of the functionality required of a modern judicial complex. The building design features two equally-sized public entrances, both with large plazas and two-story lobbies, linked to a central public corridor. This corridor connects these two entries to the remainder of the building and serves as the primary public circulation space. Separate and distinct circulation paths to all of the courts, inaccessible to the public circulation routes, were created for the judges and staff, and for the in-custody defendants.

The architectural imagery of the new Portsmouth Judicial Center is derived from classical forms typical of traditional courthouse design, and enriched by contemporary elements inspired by the American Craftsman style. Materials used for construction have been carefully selected to highlight the timeless and enduring nature of this project and to reflect the solemnity of the spaces and the proceedings which will occur within them. The architectural design thus presents a bold, dignified, and rugged judicial appearance that references traditional images of justice, but with a decidedly modern approach.

The concept of the lobby art, derived from the allegorical symbol of Lady Justice balancing the scales of truth and justice, measuring the support and opposition for each case brought before the court. The vertical spines running within the sculpture’s center allude to the double-edged sword that Lady Justice typically holds in her right hand –  which divides with the power of reason and justice, simultaneously, in either direction. Concepts were originally sketched by the Architect and presented to artists for their interpretation. 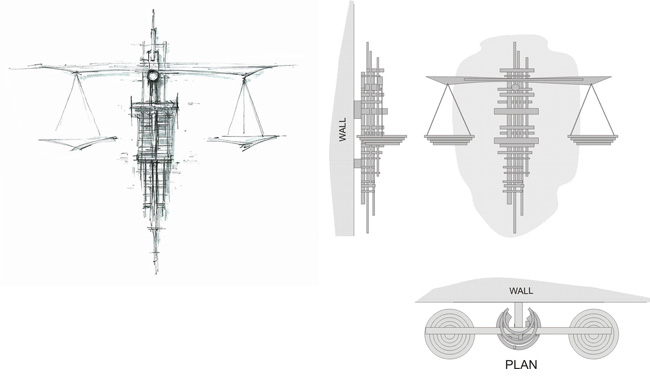 After estimates were received, the project soon became a collaborative effort between the Architect and a local fabricator in order to resolve the aesthetic goals with stringent budgetary constraints.

This effort, from initial concept to installation, took close to four months to complete; the 250-pound sculpture arrived in three pieces, was assembled, and then hung on the lobby wall, only days before the official opening of the courthouse.

Complementing the American Craftsman architectural style of the building, as well as the materials used throughout the facility, the sculpture was crafted utilizing polished aluminum and was then faux-painted in certain key areas to mimic the cherry wood accents that are used throughout the lobby space and courtrooms. Seemingly random circular patterns, stacked horizontally along the scale body, contrast with linear elements that are utilized throughout the lobby space. The sculpture itself was intended to resemble a traditional two-armed balance scale with flat-bottomed pans, hinged at the top of the beam and pivoted in the center. 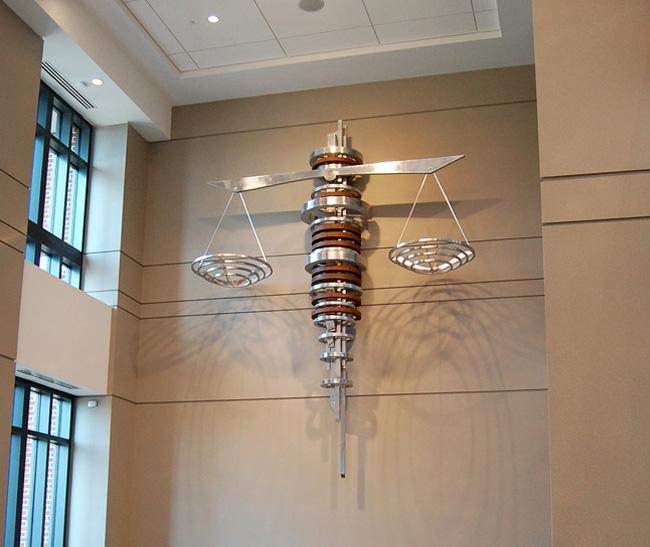 This 8’ wide by 15’ tall art piece was scaled to fit proportionally within the Lobby space and the wall on which it was hung, centered and highlighted by directional, recessed, artwork lighting. The sculptural piece was intended to enhance and supplement the architecture, while encouraging classic ideals of justice, impartiality, and objectivity. Like the building in which the artwork is housed, this piece blends the old with the new in a way that is both refreshingly neoteric and respectfully derivative. 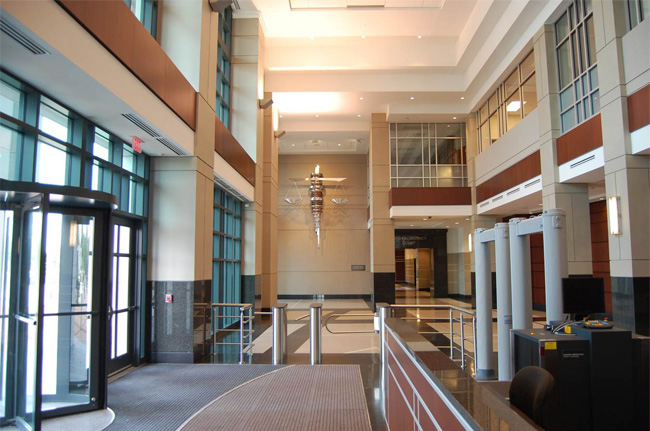