Who gave WHOM the gift?

We began a new tradition last year by making a donation on behalf of the friends and family of HBA, to the Union Mission, and by sending out an electronic holiday card rather than mailing cards through the postal system. This certainly has allowed the creative flair of our staff to be showcased by challenging them to submit designs for our card. We are also delighted to find a green way to spread holiday cheer!

This year, Jessica and I visited the Union Mission to deliver the check and found it to be such a warm and wonderful experience. We were given a tour by Mrs. Linda Vaughan, Executive Director and daughter of Dr. Theodore A. Bashford. She clearly has a passionate heart for the work they are doing at the Mission.

Union Mission was founded in 1892, and had a vision to provide spiritual and physical support for the needy and homeless. In March of 1956, Union Mission Ministries came under the direction of Dr. Theodore A. Bashford. Under his guidance, they established financial stability and helped to reaffirm their goals. Over the next four decades, the mission developed eight different ministries and two additional campuses. These missions include their Men’s Shelter, Women’s Shelter, Hope Haven Children’s Home, Hope Haven Adult Home, Camp Hope Haven, Industrial Program and Thrift Stores and their New Life Center.

Linda took us for a walk through their men’s and women’s shelters. It was such a humbling experience to hear some of the stories of folks who had been devastated by the economic downturn. Many of those people were seeking shelter for the first time in their lives, as they no longer have homes. 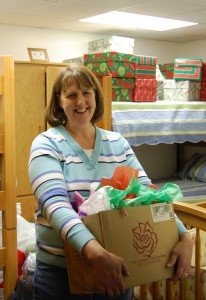 We saw where they slept, where they did laundry, where they had social time with others in the shelter. It was hard for us to fathom losing everything and having to depend on others to survive – but that is what the Union Mission provides, shelter in the time of storm.

We met volunteer Jill Gray, wife of Associate Director Rev. John Gray, who led a team of enthusiastic volunteers in making Christmas boxes. For many, this is the first gift they’d ever receive.  The gifts in those boxes clearly gave as much joy to those packing them as it would to the recipients. As we left, we hoped that the gift we delivered on behalf of the friends and family of HBA would bring as much joy to the hearts of those served by the Union Mission Ministries as our experience there brought to us. 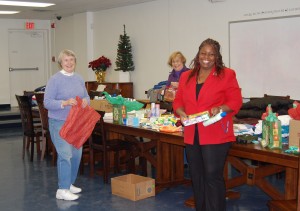 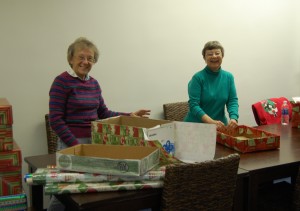