Ten years ago HBA worked with Virginia Beach United Methodist Church (VBUMC) to design an addition on the south side of their Sanctuary. Once again, VBUMC has come to HBA in need of some assistance. The challenge this time: look at demolishing the building north of the Sanctuary and replacing it with a large addition to accommodate their growing ministry.

VBUMC is growing in all areas of ministry and needs a larger facility with more specialized spaces. In addition to classrooms, storage areas, and other general needs spaces, the church has asked HBA to design a fellowship hall that can be converted from a formal dinner hall to an auditorium. The design also includes special spaces like a coffee area on the second floor which can be easily accessed by adults on their way to class, along with a third floor dedicated to the youth of the church. The renovation/addition is designed to have areas to accommodate concerts and be a hang-out for their youth, a café, game room, and a prime spot where their Youth Minister can both work and be accessible to the kids.

The design will reflect the character of the existing Sanctuary – a traditional, red brick structure. Traditional architecture is associated with specific rules and proportions that define the design. These principals are so important that as an architecture student, I spent an entire semester studying the related proportions and gaining an understanding of the importance of getting it right! With the specifics no longer committed to memory, I have relied in the past on information bound in the volumes of my colleagues’ libraries. This time, I decided to add to my own collection and invested in two great architectural books, The American Vignola and Get your House Right.

The American Vignola by William R. Ware is full of beautiful illustrations of classical architecture and describes the architectonics behind each decorative element. In defining the proportions of the arcade and pilasters I referenced this book. If followed precisely, the ratios defined can lead to some less-than-friendly shapes that would be pretty hard to build. This project, for example, had an astragal that should have protruded from the pilaster 1 13/16”; dimensions of this nature were rounded to a buildable size.

Below is a partial sketch of the addition. While the design has evolved since this was drawn, the proportions have remained the same. 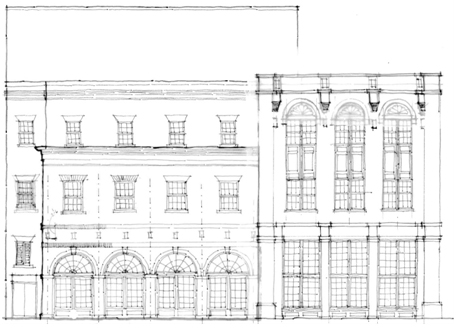 Get Your House Right by Marianne Cusato is full of common details in traditional design that are often built incorrectly, and it’s a fun read! Get Your House Right was helpful to me in the design of the brick detailing for this project. I sketched several brick patterns and studied them to determine which would be the best fit for the addition. Below are some examples, (I ended up selecting the smallest brick sketch as the cornice detail on the recessed sections of the addition). 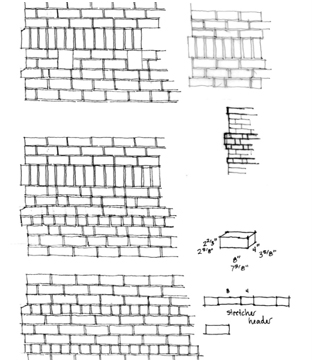 If you are interested in traditional design, I highly recommend these books; they have been a great addition to my library—in fact I wish I’d bought them long ago!