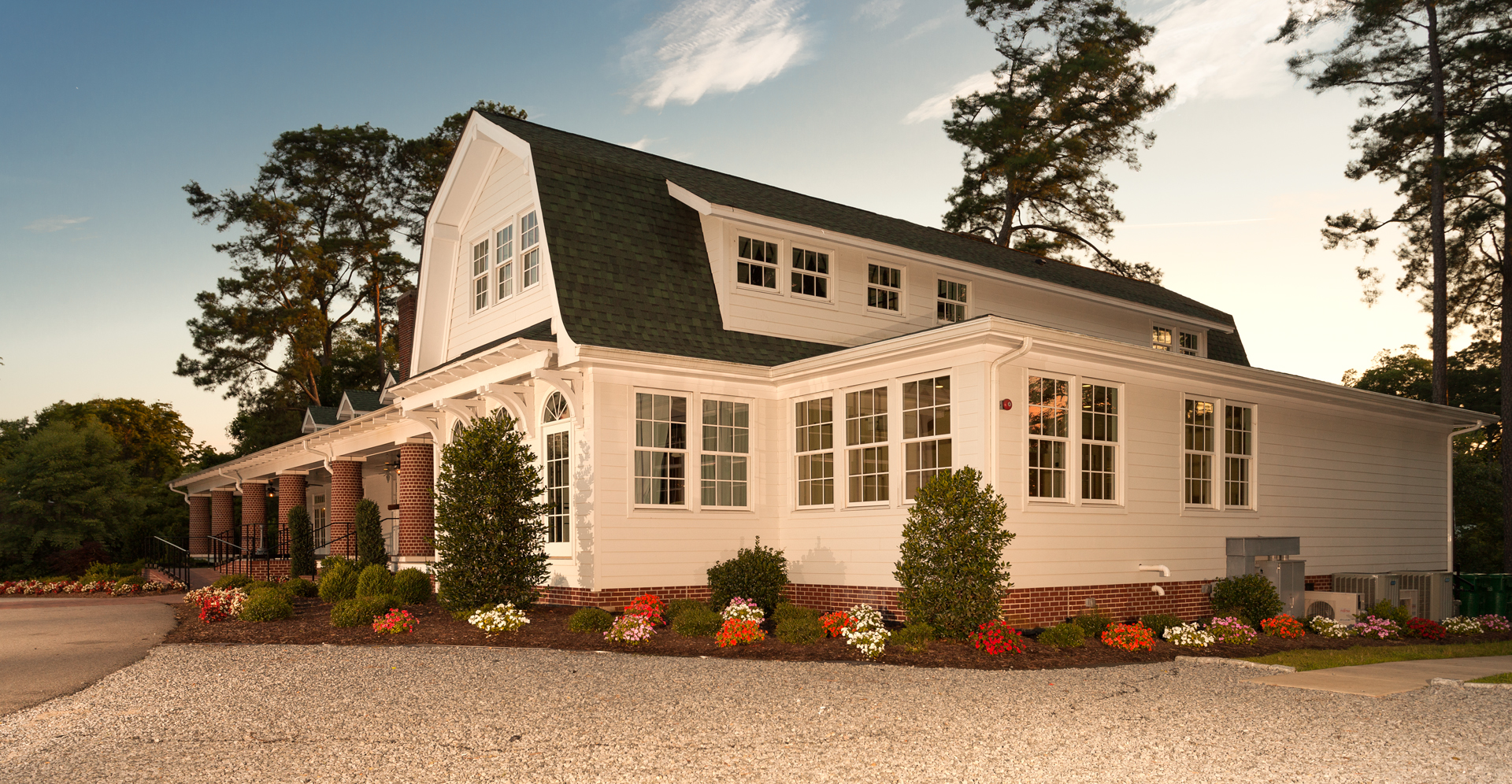 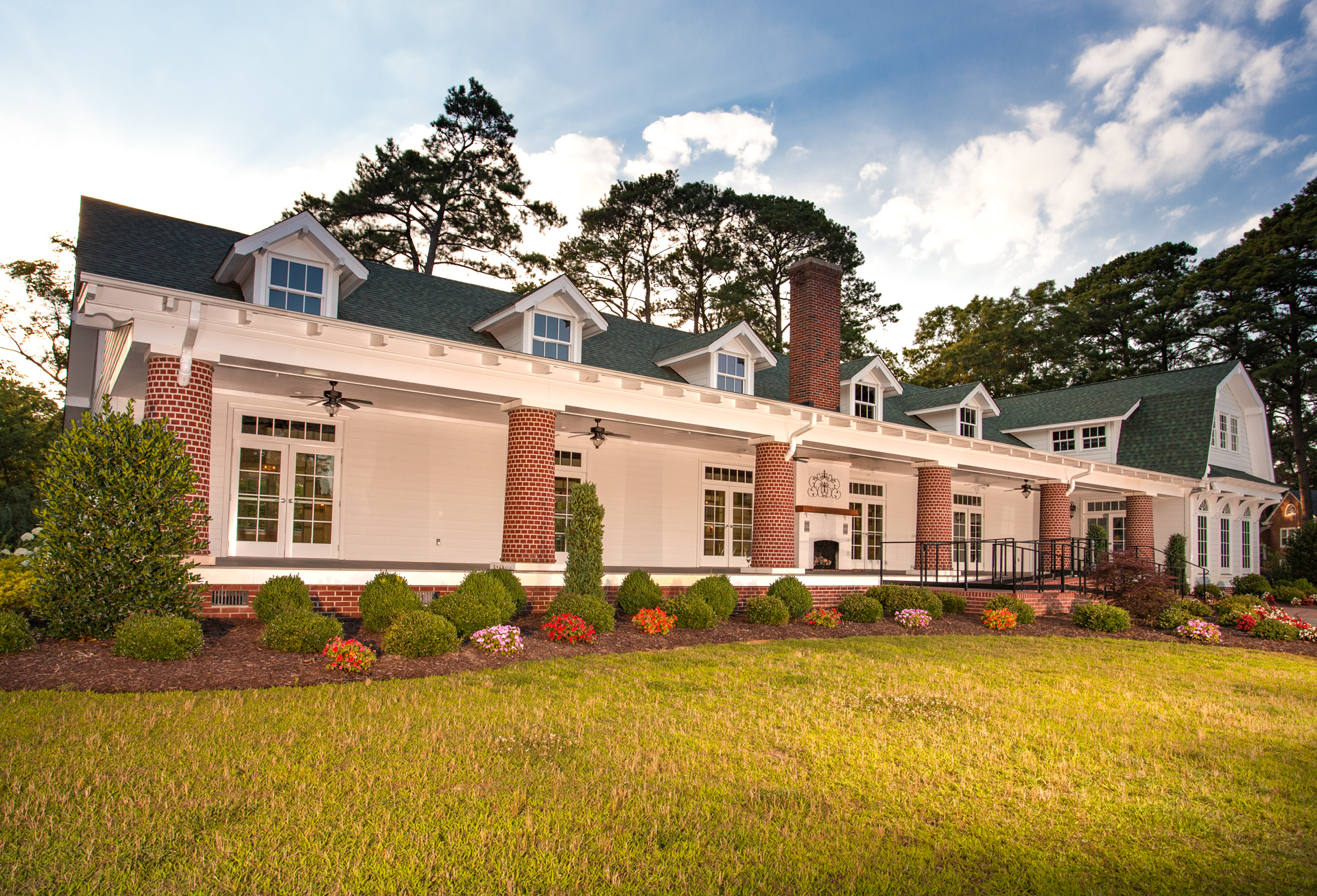 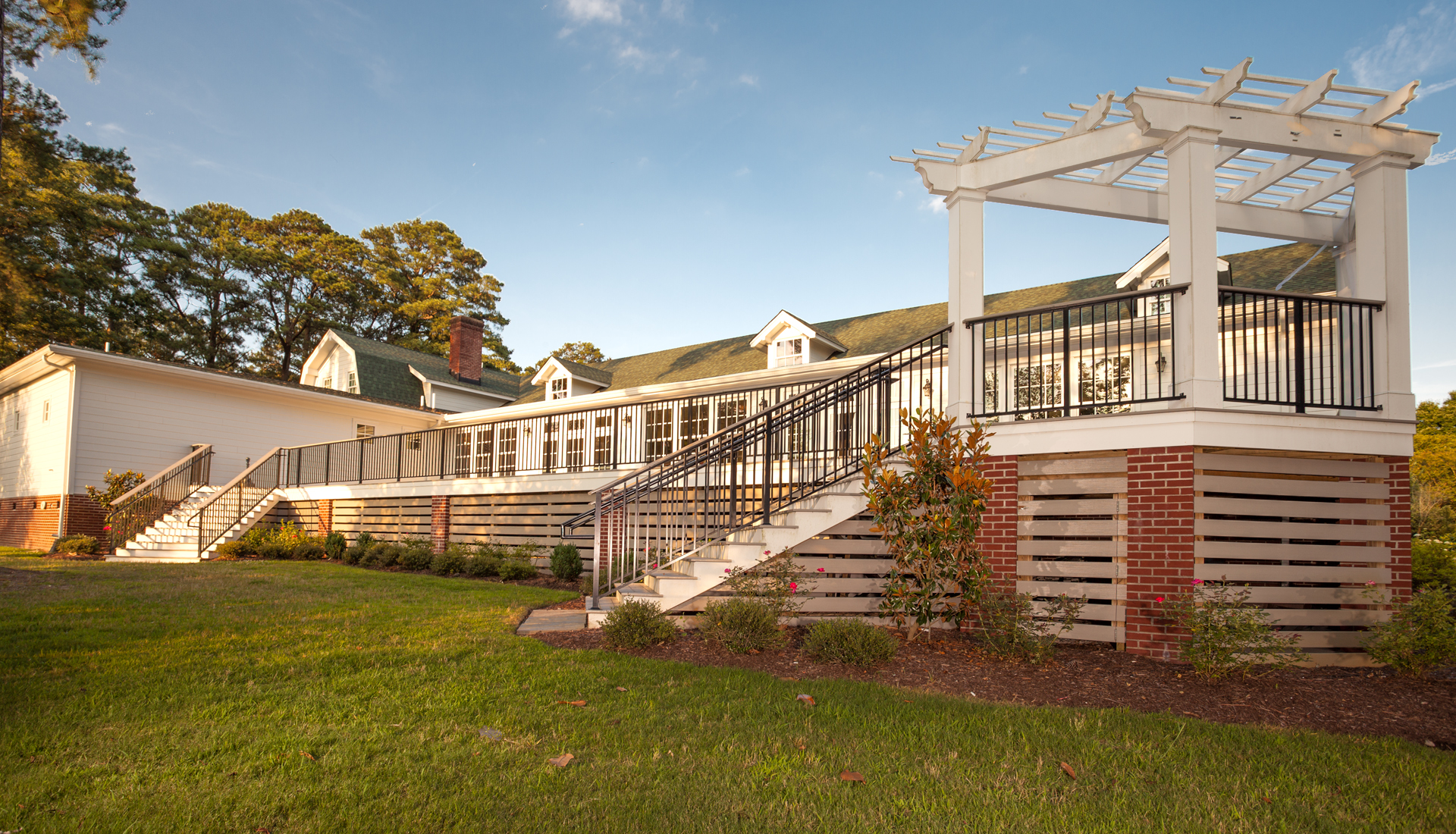 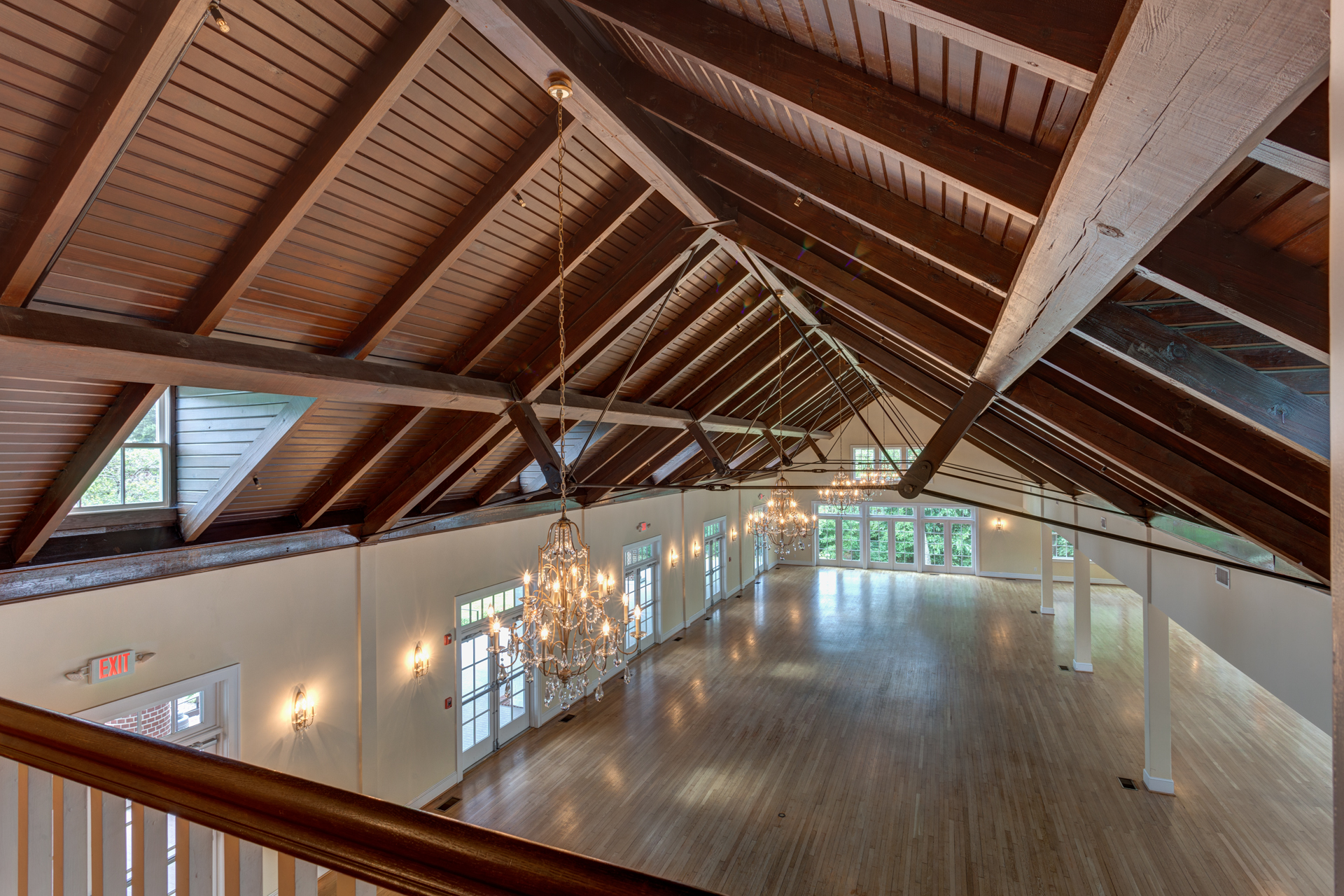 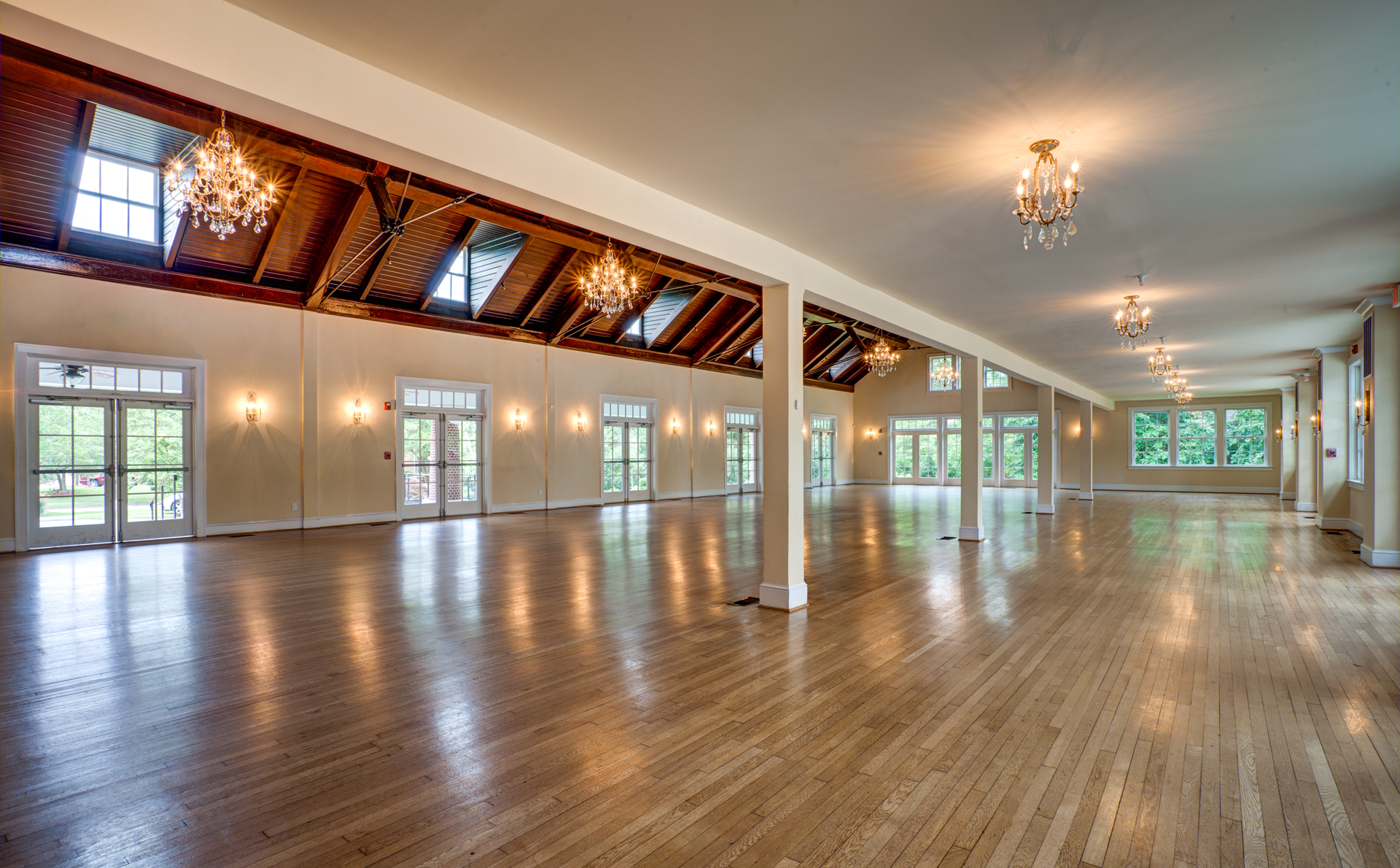 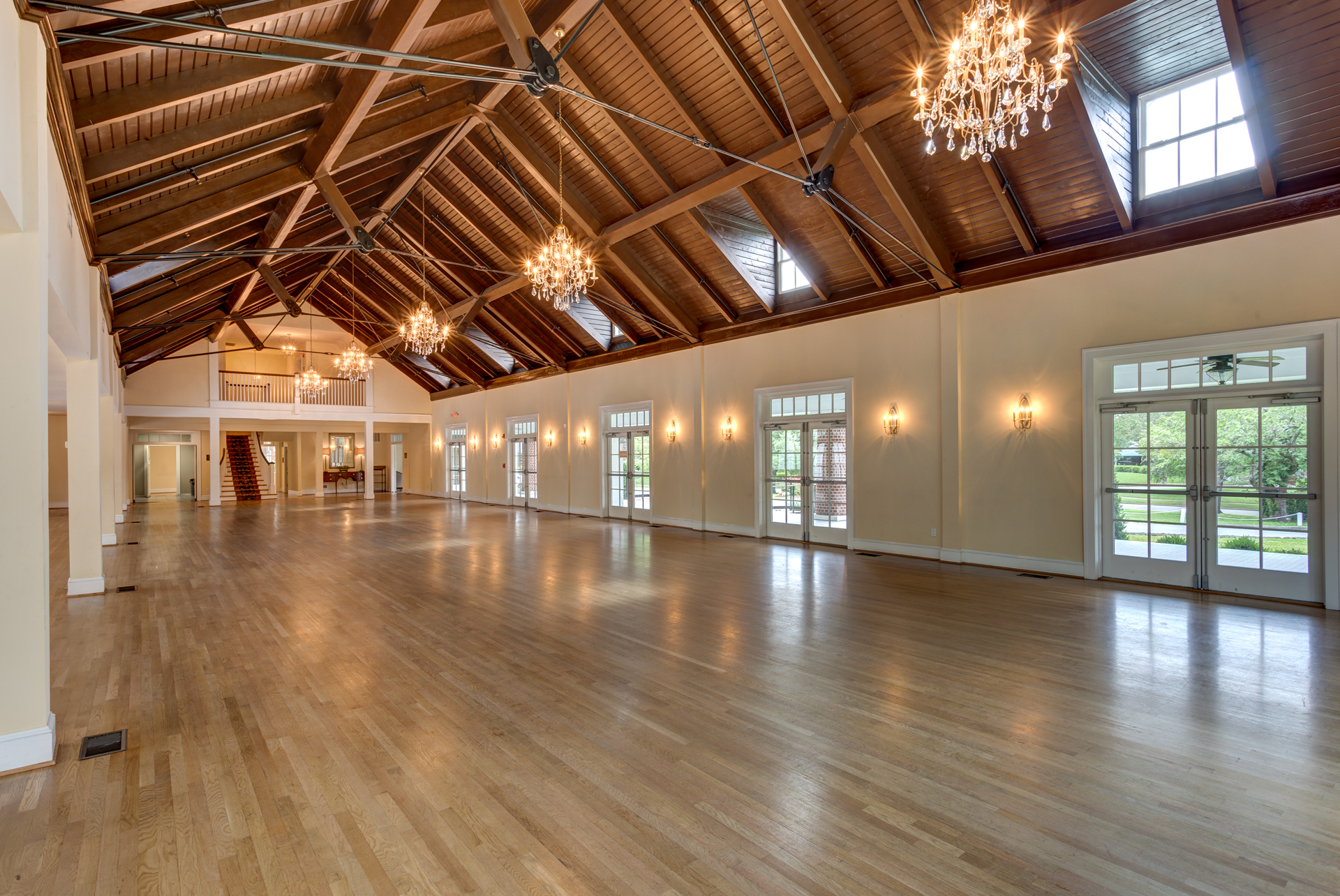 While the basic structure of the building has remained intact over the years, time has taken a toll on its appearance. The original wood siding and windows had been replaced with aluminum. The original front porch was compromised with an addition which enclosed part of the porch and destroyed two of the distinctive oversized round brick columns. On the interior, the original wood floors were damaged and had darkened with age. Many of the plaster walls were deteriorated and in need of repair. The bathrooms and kitchen were insufficient and obsolete. Lastly the HVAC and
electrical systems were totally inadequate to meet today’s needs and certainly were not up to building code requirements. However, the most significant challenge was that the main event hall was just not large enough to accommodate the size functions necessary in today’s marketplace.

When the Portsmouth Service League approached the design team they had six main requirements:
1. Restore the building to its original splendor.
2. Enlarge the main hall to accommodate at least 250 guests seated at tables and chairs and provide for a large rear deck as overflow/event space.
3. Provide elegant restroom facilities and meet accessibility requirements.
4. Provide an enlarged updated catering kitchen.
5. Provide support spaces including a bride’s room and a meeting room.
6. Upgrade mechanical and electrical systems for safety, energy efficiency and to create a comfortable environment for guests.

Two other interesting challenges the design team faced were related to the site – there is not space for adequate parking and the building lies within the Chesapeake Bay Preservation Area.

THE SOLUTION
The primary requirement in the renovation/addition was to maintain the integrity of the existing architecture for this landmark building. Additions and renovations needed to be seamless with existing.

In the final design solution the main hall, with its dramatic exposed heavy timber, steel chord trusses, was left intact, restored and extended two additional column bays. This allowed the integrity of the open truss ceiling as well as the front porch column rhythm to be maintained. The roof structure of the main hall was extended using exact replicas of the existing trusses. As a result of these changes the size of the main hall was increased by 50%. With the dormer roof windows opened back up and the floor refinished to a lighter wood finish the interior space appears even larger because it is significantly brighter.

Off the back of the main hall facing toward the inlet and wetlands we were able to get CBPA approval for a large deck at the same level as the main hall. Even though the existing building sits within the 100 foot CBPA zone we were able to provide mitigation and build within the upper 50 feet. The large deck is shaded by massive pine trees and is often used for functions during favorable weather.

The existing facility had inadequate tiny restrooms in the basement and on the upper level. A rear addition allows space for large “country club” style restrooms on the main floor adjacent to the main hall. The restroom addition also helps bring the facility into compliance with accessibility codes.

An antiquated small kitchen was enlarged and completely remodeled as a catering kitchen. The existing main open stairway which overlooks the main hall was refurbished and repaired. Upstairs is a completely remodeled bride’s room and bathroom as well as meeting room that can accommodate as many as 30 people.

The building mechanical and electrical systems were totally inadequate and were therefore completely replaced. The mechanical ductwork was all accommodated in the basement or carefully concealed in walls and chases to avoid exposure within the space. A fire suppression system was carefully and discreetly added to the building as was necessary for the increased seating capacity.
One of the most significant challenges was accommodating parking during events since only a few cars are permitted to be parked on site per the zoning requirements and on-street parking is not permitted. Fortunately the Portsmouth Service League was able to work out an arrangement with the City of Portsmouth to park at a nearby school and shuttle guests back and forth.

It is also important to note that this addition and renovation has been privately funded by donations and proceeds from the Portsmouth Service League without any government assistance or tax credit funding.

Even though the challenges of working with an antiquated existing building on a site limited by the CBPA and City Zoning regulations seemed overwhelming at times through the design and construction process, the final results of renovating this landmark building have proved to be an unprecedented success for the Portsmouth Service League. This Portsmouth landmark has been revitalized reflecting its glorious past and reestablishing the Woman’s Club of Portsmouth building as a Portsmouth icon.