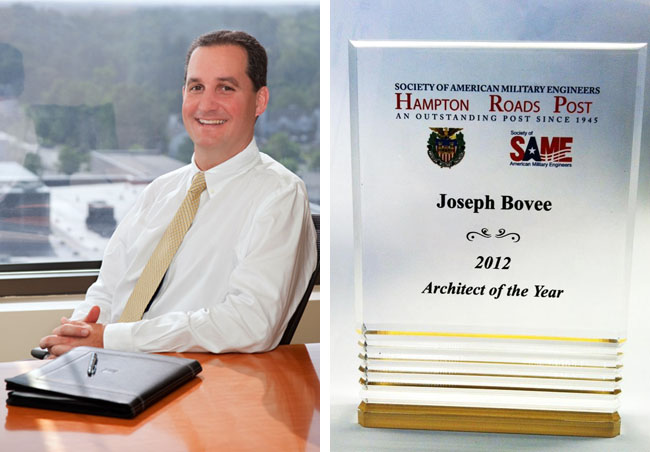 On Wednesday, February 20, 2013, the Hampton Roads Post of the Society of American Military Engineers (SAME) honored Joe Bovee, a principal at HBA, with its 2012 Architect-of-the-Year Award.  The citation for the Award reads as follows:

“Joseph Dean Bovee, AIA has distinguished himself as an exceptional leader in the design of facilities for the U.S. Department of Defense.  Over the past 15 years, Joe has led the Federal/DOD Studio of HBA Architecture & Interior Design and transformed HBA into one of the nation’s leading designers of DOD facilities.  Joe has led by example and influenced the careers of several young architects and interns.  He has mastered design and delivery of nearly every imaginable facility and project type known to MILCON.  He is a proven innovator and piloted one of most successful value engineering programs in NAVFAC history.  In addition to saving millions of dollars in MILCON spending, Joe helped focus design on delivery of high quality facilities that solved complex problems and have endured beautifully.  Joe is a skilled communicator that patiently works hard to understand a problem and alternative solutions prior to solving them.  Joe is an accomplished designer and has left landmarks on many installations across the Mid-Atlantic and beyond to delight of many marines, sailors, soldiers and airmen.  Mr. Bovee’s record of accomplishment as a designer is outpaced only by the respect, loyalty and friendship earned among his clients, co-workers, consultants and contractors.  Joe’s character truly inspires those around him to be better at everything they do.  Joe Bovee is an outstanding architect, loving husband and father, and a great asset to the SAME and Virginia Beach communities, who has contributed immensely to the welfare and quality of our national defense installations.”